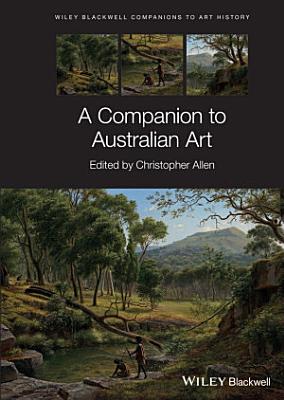 A Companion to Australian Art A Companion to Australian Art is a thorough introduction to the art produced in Australia from the arrival of the First Fleet in 1788 to the early 21st century. Beginning with the colonial art made by Australia’s first European settlers, this volume presents a collection of clear and accessible essays by established art historians and emerging scholars alike. Engaging, clearly-written chapters provide fresh insights into the principal Australian art movements, considered from a variety of chronological, regional and thematic perspectives. The text seeks to provide a balanced account of historical events to help readers discover the art of Australia on their own terms and draw their own conclusions. The book begins by surveying the historiography of Australian art and exploring the history of art museums in Australia. The following chapters discuss art forms such as photography, sculpture, portraiture and landscape painting, examining the practice of art in the separate colonies before Federation, and in the Commonwealth from the early 20th century to the present day. This authoritative volume covers the last 250 years of art in Australia, including the Early Colonial, High Colonial and Federation periods as well as the successive Modernist styles of the 20th century, and considers how traditional Aboriginal art has adapted and changed over the last fifty years. The Companion to Australian Art is a valuable resource for both undergraduate and graduate students of the history of Australian artforms from colonization to postmodernism, and for general readers with an interest in the nation’s colonial art history.

A Companion to Australian Art

A Companion to Modern Art

Authors: Pam Meecham
Categories: Art
A Companion to Modern Art presents a series of original essays by international and interdisciplinary authors who offer a comprehensive overview of the origins

A Companion to Nineteenth-Century Art

Authors: MIchelle Facos
Categories: Art
A comprehensive review of art in the first truly modern century A Companion to Nineteenth-Century Art contains contributions from an international panel of note

A Companion to Impressionism

A Companion to Curation

Authors: Brad Buckley
Categories: Art
The definitive reference text on curation both inside and outside the museum A Companion to Curation is the first collection of its kind, assembling the knowled

A Companion to Textile Culture

Authors: Jennifer Harris
Categories: Design
A lively and innovative collection of new and recent writings on the cultural contexts of textiles The study of textile culture is a dynamic field of scholarshi

Routledge International Handbook of the Sociology of Art and Culture

Authors: Laurie Hanquinet
Categories: Social Science
The Routledge Handbook of the Sociology of Arts and Culture offers a comprehensive overview of sociology of art and culture, focusing especially – though not

A Companion to Feminist Art

The Persistence of Taste

Authors: Malcolm Quinn
Categories: Social Science
This book offers an interdisciplinary analysis of the social practice of taste in the wake of Pierre Bourdieu’s sociology of taste. For the first time, this b

A Companion to Rock Art