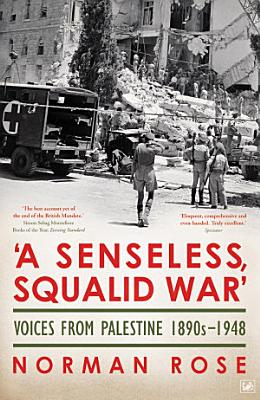 The events in Palestine between the end of the Second World War in May 1945 and the declaration of the State of Israel in May 1948 ruptured Middle Eastern history and left an indelible mark on the modern world. Today, no conflict is felt to be more intractable or divisive, no dispute so fraught with passion or infused with so much hatred, despite the repeated attempts at reconciliation between Israelis and Palestinians in the six decades since Israel came into being. Yet how did it feel to witness and experience these momentous events? In 'A Senseless, Squalid War' Norman Rose uses contemporary sources - letters, songs, diaries and stories as well as journalism and official propaganda - to reveal the attitudes and experiences of the participants from all sides of the unfolding drama. 'A Senseless, Squalid War' also chronicles the political context of these crucial years. In the immediate aftermath of the European war, amidst the horrific revelations of the Holocaust and a diplomatic stalemate over the partitioning of Palestine, militant guerrilla groups sought to undermine the British presence. Jewish refugees in their thousands had been trying to enter Palestine since the early 1940s, many on the notorious 'death ships' from Eastern Europe, with tragic consequences. The massacre at Deir Yassin and the forced transfer of up to 700,000 Palestinians; the British withdrawal and the celebration of independence; the mounting tensions and the 'war of extermination and momentous massacre' - all this, and the voices of those who lived it, are recreated as never before in Norman Rose's powerful and vivid work.

Authors: Norman Rose
Categories: History
The events in Palestine between the end of the Second World War in May 1945 and the declaration of the State of Israel in May 1948 ruptured Middle Eastern histo

Authors: Norman Rose
Categories: History
The troubles in Palestine between the end of the Second World War and the declaration of the state of Israel ruptured Middle Eastern history and left an indelib

Trials of the Diaspora

Authors: Anthony Julius
Categories: History
The first ever comprehensive history of anti-Semitism in England, from medieval murder and expulsion through to contemporary forms of anti-Zionism in the 21st c

Authors: Jeremy Havardi
Categories: History
In recent decades, Israel has come under sustained diplomatic pressure from the West. According to the press and the policy establishment, she acts aggressively

Authors: Eric Gartman
Categories: History
The history of modern Israel is a story of ambition, violence, and survival. Return to Zion traces how a scattered and stateless people reconstituted themselves

The Jewish Choice: Unity or Anti-Semitism

Authors: Michael Laitman
Categories: History
The Jewish Choice: Unity or Anti-Semitism is like no other book you have ever read about Jews, about history, or about anti-Semitism. As its title suggests, it

A Line in the Sand

Authors: James Barr
Categories: History
A fascinating insight into the untold story of how British-French rivalry drew the battle-lines of the modern Middle East. In 1916, in the middle of the First W

Counterinsurgency Wars and the Anglo-American Alliance

Authors: Andrew Mumford
Categories: History
Andrew Mumford challenges the notion of a “special relationship” between the United States and United Kingdom in diplomatic and military affairs, the most v

British Fascism After the Holocaust

Authors: Joe Mulhall
Categories: Political Science
This book explores the policies and ideologies of a number of individuals and groups who attempted to relaunch fascist, antisemitic and racist politics in the w