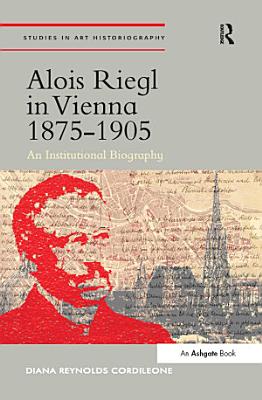 In Alois Riegl in Vienna 1875-1905: An Institutional Biography, Diana Cordileone applies standard methods of cultural and intellectual history for close readings of Riegl?s published texts, several of which are still unavailable in English. Further, the author compares Riegl?s work to several of the early works of Friedrich Nietzsche that Riegl is known to have read before 1878. Using archival and other primary sources this study also illuminates the institutional conflicts and imperatives that shaped Riegl?s oeuvre. The result is a multi-layered philosophical, cultural and institutional history of this art historian?s work of the fin-de-si?e that demonstrates his close relationship to several of the significant actors in Vienna at the end of the nineteenth century, an epoch of innovation, culture wars and political uncertainty. The book is particularly devoted to explaining how Riegl?s theories of art were shaped by debates outside the purview of the academic art historian. Its focal point is the Austrian Museum for Art and Industry, where he worked for 13 years, and it presents a new interpretation of Riegl based upon his early exposure to Nietzsche.