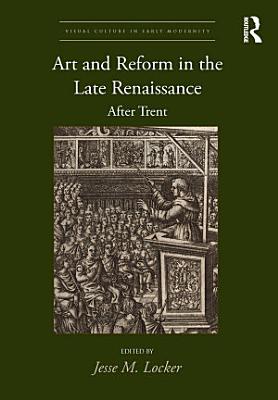 Drawing on recent research by established and emerging scholars of sixteenth- and seventeenth-century art, this volume reconsiders the art and architecture produced after 1563 across the conventional geographic borders. Rather than considering this period a degraded afterword to Renaissance classicism or an inchoate proto-Baroque, the book seeks to understand the art on its own terms. By considering artists such as Federico Barocci and Stefano Maderno in Italy, Hendrick Goltzius in the Netherlands, Antoine Caron in France, Francisco Ribalta in Spain, and Bartolomeo Bitti in Peru, the contributors highlight lesser known "reforms" of art from outside the conventional centers. As the first text to cover this formative period from an international perspective, this volume casts new light on the aftermath of the Renaissance and the beginnings of "Baroque."

Art and Reform in the Late Renaissance

Art and Reform in the Late Renaissance

Pontormo and the Art of Devotion in Renaissance Italy

Authors: Jessica A. Maratsos
Categories: Art
Both lauded and criticized for his pictorial eclecticism, the Florentine artist Jacopo Carrucci, known as Pontormo, created some of the most visually striking r

Emotions, Art, and Christianity in the Transatlantic World, 1450–1800

The Procaccini and the Business of Painting in Early Modern Milan

The Capuchins and the Art of History

Authors: Karl Kusserow
Categories: Art
A diverse set of contributions to the expanding field of ecocritical studies Seeking a broad reexamination of visual culture through the lenses of ecocriticism,