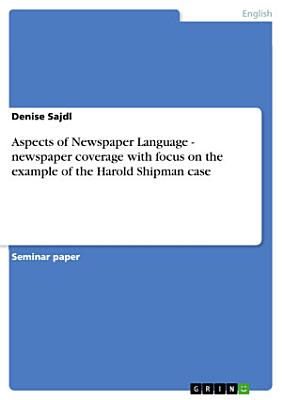 Seminar paper from the year 2006 in the subject English Language and Literature Studies - Linguistics, grade: 2,0, Ruhr-University of Bochum (Englisches Seminar), course: Legal Language, 15 entries in the bibliography, language: English, abstract: Media are the dominating presenters of language in our society. News language has a mass audience, it ́s the few talking to the many, and thus has enormous power and influence in the world. This term paper will analyse some important works of linguistic theory concerning the language in the news, especially focussing on the print language of newspapers. Chapter 2 wants to give a brief introduction into the field, that means it gives some definitions extracted from different sources to the general meaning of newspaper language. The theoretical background knowledge like e. g. explicit linguistic tools that are characteristic and exclusively found in newspaper language are being presented in the following chapters. Here, I will try to demonstrate in how far the role of linguistic structure is extremely important in the construction of language in the news. The explained analytic devices will be better illustrated by examples taken from select British newspapers, all dealing with the Harold Shipman case, one of the most spectacular event in British media. Harold Shipman, a British general practitioner, was the most prolific known serial killer in the history of Britain who killed around 250 patients from the 1970s to 1998, mainly elderly women who lived alone and were otherwise in good health. He was eventually caught after he ineptly forged a new will in the name of one of his victims. Shipman was convicted on 15 sample charges in 2000 and sentenced to life imprisonment. “Dr. Death” (the media gave him this nickname) committed suicide in 2004, without admitting to or explaining his crimes. The style of the Sun newspaper is very different from that of the Guardian, and the readerships of the two papers are very distinct in socioeconomical terms. Therefore, the reports by four different British newspapers concerning this topic are being examined and compared, namely the Guardian, the Daily Telegraph, the Daily Mirror and The Sun. After all, this paper wants to prove that news is a representation of a construction of social and economic values, and not a value-free reflection of “facts”. It is written to look at the way the news texts present, and to a certain extent create or at least influence, aspects of our (in this case the British) culture and society.

Serial Killers and the Media

Authors: Ian Cummins
Categories: Law
This book examines the media and cultural responses to the awful crimes of Brady and Hindley, whose murders provided a template for future media reporting on se

The International Journal of Speech, Language and the Law